We are now weeks into the Gold Coast's most successful year

We are now weeks into the Gold Coast's most successful year

The Gold Coast has well and truly shrugged off the holiday season as the city cheers on the Commonwealth Games, $13 billion of investment and development and a raft of new events.

The city will be broadcast to an audience of more than 1 billion across the world for 11 days and Mayor Tom Tate says a long-feared Games hangover won’t eventuate on the back of the profile plus largest investment injection in the city’s history. 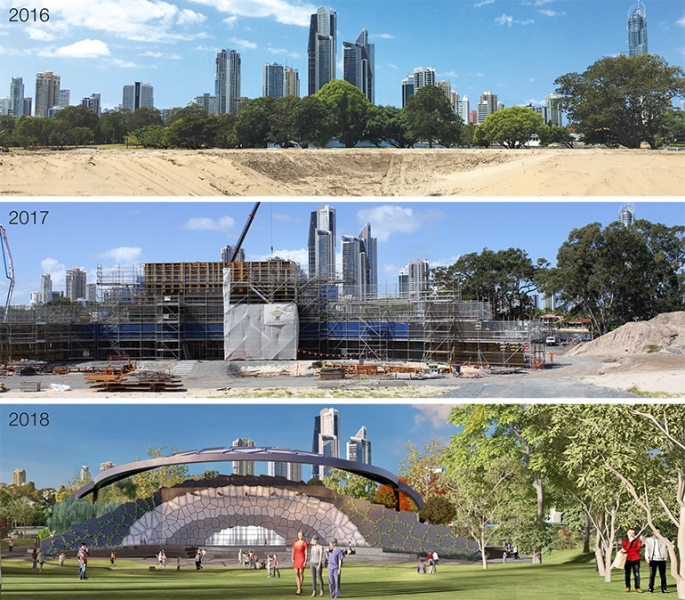 Above: The $37 million stage 1 completed in time for the Gold Coast Commonwealth Games while stage 2 has broken ground. Source: goldcoastculturalprecinct.info

Here's a closer look at the City of Gold Coast's agenda for 2018:

*Ground broken in May on stage 2 of the cultural precinct, including a $60 million art gallery and new bridge between Evandale and Chevron Island.

* The approval of a series of major developments including Sunland’s $200 million The Lanes Shopping Centre at Clear Island Water, and $200 million Hedges Ave 44-storey tower, the $1.2 billion Breakwater residential complex at Robina and $600 million Songcheng theme park at Carrara.

* The completion of the $420 million first stage of Coomera Town Centre by Christmas and the first of the four towers of the Ruby high-rise complex in Surfers Paradise.

* Completion of the business case study for the light rail’s third stage from Broadbeach to Burleigh Heads.

* Completion of the feasibility report into the council’s proposed cruise ship terminal.

Cr Tate said confidential talks were also underway for a number of other projects he expected would be announced in the second half of 2018.

“There are more projects coming down the pipeline. I cannot discuss them publicly yet but my confidence is high,” he said.

“My other prediction would be that you will see a significant amount of investment in the city from the Asian market following Chinese New Year in mid-February.”

Above: The Broadbeach to Burleigh Stage 3 light rail, Source: gchaveyoursay.com.au/lightrailtoburleigh.

“Nothing like the Games has ever happened before and given all the hype sometimes people get a bit blas� but this will be the biggest event in the Gold Coast’s history and that of the state,” he said.

“This will be the most exciting time on the Coast’s history and the legacy of what happens this year will go on for generations.”

Cr Tate: “People have been saying to me after the Games there is going to be a hangover.

“But here on the Gold Coast we party hard and will do so during the Games but I can tell you now the party will continue on afterwards for business because we will have $13 billion in investment on its way from February onward. Source: Gold Coast Bulletin.